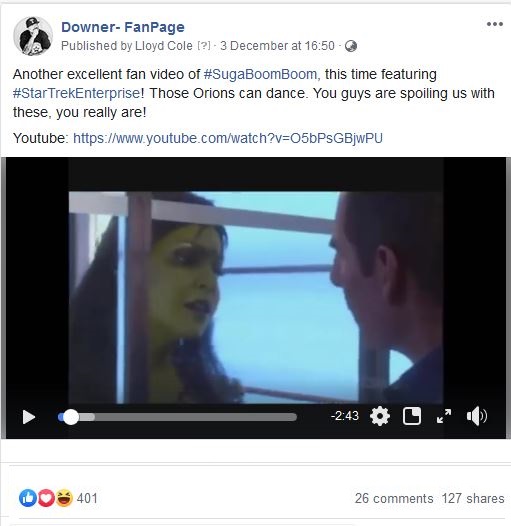 18K views in just three days! That’s an insanely viral step in the right direction. You can add your view to the counter right here, if you happen to be curious. Who would have thought that Star Trek and Suga Boom Boom would have worked so well together?

To answer that question, we can turn our attention to our social media teams! Led by Edmund Cotter, this team of Kenny Everest, Nathan Rhodes, Brendan Paniagua, and Sid Kirkman have put together these viral strategies as seen in the Star Trek Suga Boom Boom video, as well as the various Marcel Effect videos, and Wednesday Addams dancing to Suga Boom Boom! Creative initiatives like these pay off!

These videos are making big waves on both Down3r’s Facebook and on our Youtube. The fans love every second of it, and there’s more mashups and memes to come!

We also have a lot of thanks to give towards the fans of Down3r. The social media team can’t do all the work, and the fans have submitted memes to us as well, and have pushed these viral initiatives over the edge into success with their enthusiastic engagements and shares! Tens of thousands of people have been reached through these campaigns in just a few short days, and that sort of movement only happens with posts of wonderful quality! For instance, who could ever forget The Marcel Effect?

ust goes to show you what fans can do, right? Not only in terms of the creative content they put out and sent to us out of their sheer enthusiasm for the music they loved, but the massive publicity push behind them that’s bringing entertainment and laughter to Down3r fans, new and established, the world over! And of course, the social media teams have to give themselves a pat on the back for helping get this off the ground with their Herculean efforts. There’s still more to come and it’s looking like there’s exciting times for the Down3r fandom in the future! Suga Boom Boom!

But in case you’ve been living under a rock, you might be wondering who DL is and why you should check out the viral sensations his music has been kickstarting at all? Perhaps wondering why you should even bother checking his social media or tracking his tours on BandsInTown, and other such means of connection? Wonder no further- consider this a tutorial in supreme hip hop!