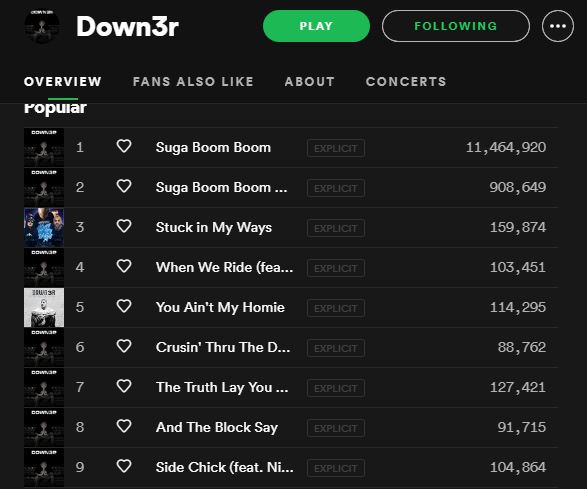 Read ’em and weep, everyone! Suga Boom Boom has always been the flagship of Down3r’s popularity and musical style, but when Suga Boom Boom, Suga Boom Boom part 2, and all his other top tracks get this much traction, we can’t help but celebrate our astonishment! It’s a testament to the devotion of the fanbase, the musical prowess and skill of Down3r himself, and just how catchy the songs themselves are!

Down3r’s works have hit the millions mark before, but it’s always a great pleasure to see them continue to climb. It won’t be long before Suga Boom Boom has 12 million plays on Spotify just by itself, without combining plays at all! It’s insane!

Down3r isn’t slowing down nor are his tracks. There’s a new release and a few shows in the works too, so stay tuned! You’ll get your DL fill yet, fans!

And check out No L’s, one of the latest blappers from Down3r and his crew!