The Sound Of Dreams tour is an upcoming blockbuster event for all you folks up North! Straight from Last Call Music comes a collaboration between Uno Tha Prodigy and the one and only Mr Suga Boom Boom, DL Down3r himself! 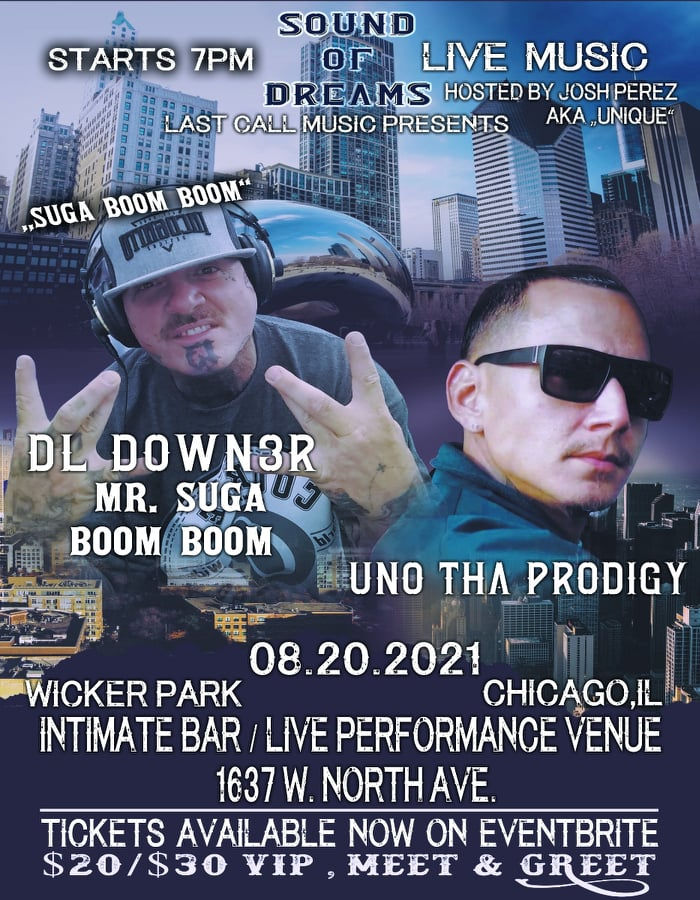 From 7PM on 08.20.2021, Chicago Illinois is gonna get real lit! And with tickets available from as low as $20, this is a night for everyone. Meet and greet with the stars at Wicker Park is gonna be extremely dope, too! Just look at the sorta shoutouts Down3r has gotten in the past, to give you an idea… nice ink fam!

Not to mention that Uno is gonna be there too! And if you know anything about DL’s work, you KNOW that Uno always has his back and the work they do together always slaps. Have just a bit of a taster here!

Typically they pair up for emotional smooth cruisers like this one. So you just know that 08.20 is gonna be one hell of a night, straight from their hearts! Hosted by Josh “Unique” Perez, the Intimate Bar is gonna have a huge turnout, we’re calling it now! We dunno how the viral climate will be in a few months’ time, but be sure to wear a mask! We’ll see you there: wanna know where? The address is in the flyer above!

Through fierce and funky west coast rap, Down3r shares his prolific work with the rest of the world, and the stage with west coast rap legends such as Coolio, Brown Boy, Jay Tablet, Lil Young, Snoopyblue, LadyDice, Baby Bash, Steel City Hustlers, King Z and DJ Kane to name a few. From powerful messages, lyrical poetry and sharp comments on society, to G-funk and Trap/EDM hype songs, he proves that age and experience is the opposite of a liability in today’s rap game.

With those as a taster, let this be an introduction to the rest of your hip hop life!