This is huge! It wasn’t that long ago that we reported that Down3r was making waves in Reverbnation, but really, just a couple days later, we have even better news! Down3r is now number 16 for hip hop in Reverbnation! He’s number 1 locally and regionally, and number 16 at a national and global level! That’s amazing when you consider Reverbnation has a whopping 4 MILLION users! 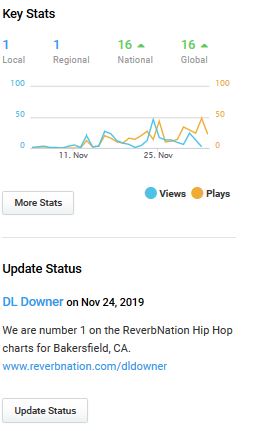 Up and up and up we go! On the 25th of November, Down3r was still the number one in Hip Hop for both Bakersfield and California as a whole, but he was only ranked 111th nationally, and 131st globally. In just under two weeks, he’s shot up by over 100 places! If that kind of traction also gets kicked into gear on his BandsInTown, there’s no telling just how far his tour scene might go! Could he soar to number one in the national or even global ranking? Time will tell… and he’s not really that far off! Fingers crossed for our boy DL!

But in case you’ve been living under a rock, you might be wondering who DL is and why you should check out any of his tours or his reverbnation at all? Perhaps wondering why you should sign up for BandsInTown to follow this mysterious artist? Wonder no further- consider this a tutorial in supreme hip hop!