Well, we said we were hype when we heard that Down3r would be opening the first 5 minutes of this movie, but we never truly realised our hype until we saw the entire movie had been dropped onto Youtube!

DL Down3r made a cameo appearance in Joke Join Comedy Showcase’s movie production, in the first five minutes of the film. Also in attendance of the premiere were Low G, Juan Gotti, Quota, Swisha House, and the movie starred Lil Young and Rasheed! That premiere sounded like a fun night of 18+ comedy, but don’t be discouraged if you missed it. You can still show your love for everyone involved with this ambitious project by watching it on Youtube in the comfort of your home! And if you need more info for next release, then check out the official website for the Joke Joint Comedy Showcase here! www.jokejointcomedyshowcase.com 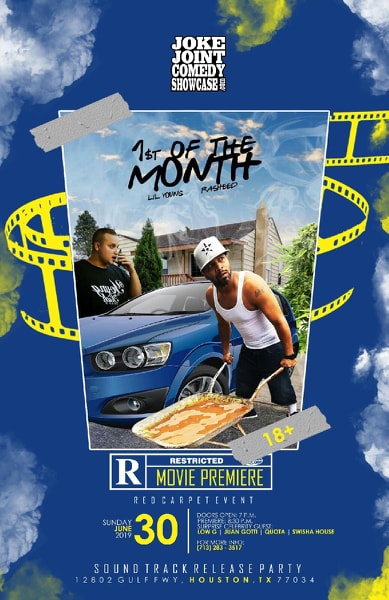 And if you want more of Down3r or are unfamiliar with his excellent work, do WE have the playlist for YOU?!

Sounds like the ideal night for a hangout. Start it off with booze, snacks, and DL’s music, and finish it off with movie night, and 1st Of The Month as the feature presentation!